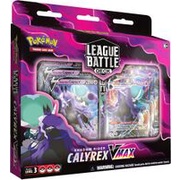 Take the reins of destiny and battle your way to victory with Shadow Rider Calyrex, the High King Pokémon! This Pokémon VMAX is yours in this powerful, League-ready deck for skilled Trainers and Pokémon TCG players. With a slew of cards including premium foil cards, sought-after power cards, and a well-tuned set of Pokémon and Trainer cards, the Shadow Rider Calyrex VMAX League Battle Deck does more than feature a Legendary Pokémon of the Galar region: it puts together all the elements to support you in your next match against friends and neighbors, in person or online!